This is one of those recipes that’s so stinkin’ cute but also super easy.

Halloween is a time of year when we eat a lot of “fun” foods.

(Yeah I said “time of year.”  It ain’t just a single day in this family – we celebrate for at least a month … but I’m always up for something spooky.)

So I like to spruce up meals and snacks when I can.  Which means some are quite elaborate and others… well, are like this!

This dish that has essentially two ingredients:  a can of cinnamon rolls and a bag of chocolate chips. 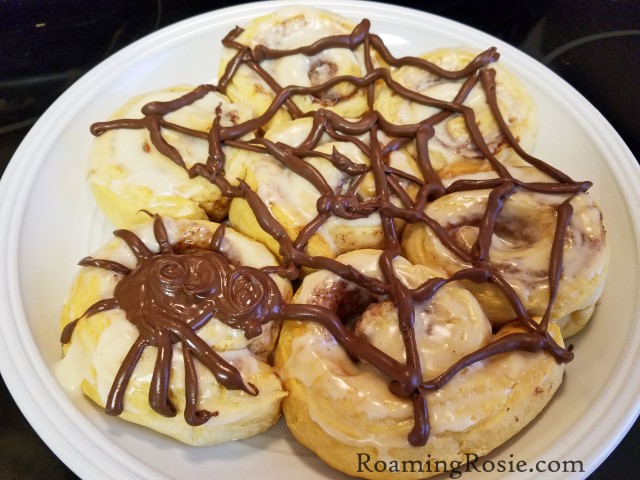 To get this platter of spookiness, bake the cinnamon rolls according to package directions and place the finished rolls in a circle on a plate.

Melt some candy melts or chocolate chips.  Candy melts are smoother but I didn’t have any on hand.  If you melt the chocolate chips in the microwave, do it at half power 30 seconds at a time.

Put the melted chocolate into a piping bag or a baggie with the corner cut off, and squeeeze out the chocolate into a big and little circle for a spider’s body, along with eight legs, onto one of the rolls.

Then draw a web over the rest.  I did this with the straight lines first and then spiraled around to make it look like a web. And don’t worry if it doesn’t look perfect – it’ll be gobbled up soon anyway!

And it’s pretty quick to do with the help of store bought cinnamon rolls.

I popped those babies out of the can, formed a flower near the top of the pan {one roll in the center and 5 around it to act as petals} and then cut the remaining 2 rolls in half to use for the stem and leaf.

I was pretty happy about how much it actually resembled a flower even before I added the colored sprinkles.

Once you pull the buns out of the oven, add some colored sugar sprinkles right after spreading on the icing – otherwise the icing will start to harden just enough for the sprinkles to not stick.  You have to be kind of quick about this step, so pick out your colors ahead of time.

Now, I made these for my mom on her birthday because she is a gardener and she likes flowers…. but while I was sprinkling on the bright colors, I realized it would also make an impressive centerpiece for any springtime or Easter breakfast or brunch.

Well, that is, it would make an impressive centerpiece if you transferred the buns to a platter instead of being all lazy like me and serving it right on the cookie sheet…..

And if you’re a big fan of sprinkles, check these out: 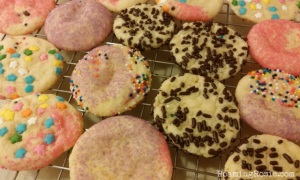 We had these Jack O’ Lantern Cinnamon Buns for breakfast the morning after Halloween.

I know, I know… didn’t we get enough sugar from trick or treating??

Well, yes, but Halloween was on a Friday and darned if I was going to let an entire weekend go by without continuing the celebration.

However, I was looking for something very easy.  Not “oh, that wasn’t too bad.”  EASY.

I mean, I could have gone all out and made the dough from scratch, taking the time to dye it orange, and mix in some real pumpkins, and to dye the icing as well, but – really – I couldn’t be bothered.

Not while dealing with a candy hangover, anyway. 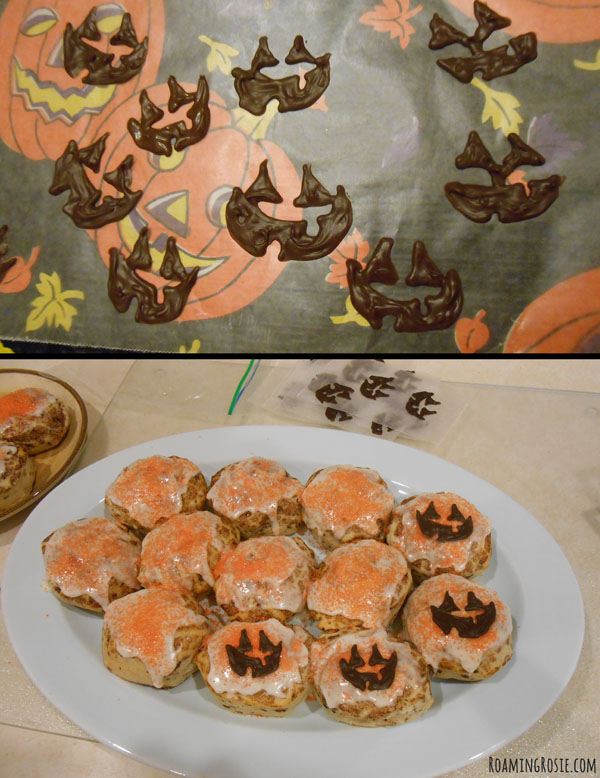 One of the reasons this was easy was because nothing was homemade.

But those I did when I was making chocolate covered marshmallow ghosts a few days earlier.

Either way, you should do these ahead of time.  There’s no reason not to:  they keep well.

What I did was freehand some jack o’ lantern faces on some waxed paper with some melted dark cocoa candy melts.  You could try to use regular chocolate chips, but I don’t suggest it.

At first, I tried to make two eyes, a nose, and a mouth {see the faces in the upper right hand corner of the above photo} but they just looked strange.  Instead, I switched to just making two eyes and a mouth.

Just make sure that the mouth touches both of the eyes so that the face is all one piece.  Otherwise you’ll be pulling a bunch of little pieces off of the waxed paper and puzzling it together waaaaaaay too early in the morning.  This way it’s just peel-and-stick.

As I mentioned, the buns and icing were just regular store bought cinnamon rolls.  So cook them according to the package directions, then remove them to a serving platter and add the icing.

Before the icing starts to dry and harden, sprinkle them generously with the orange sugar sprinkles.

Then place the chocolate faces on top.  Press ever so gently to make sure it’s stuck to the icing, but don’t press down too hard.  Pressing down roughly will cause the faces to break, and after a few minutes they’ll melt slightly, adhering to the icing all by themselves.

Then just serve and relax!

Here are the sprinkles and candy melts I used:

Orange sprinkles can be more difficult to find when it’s not fall, but then, you probably won’t be making these for any occasion but Halloween anyway.