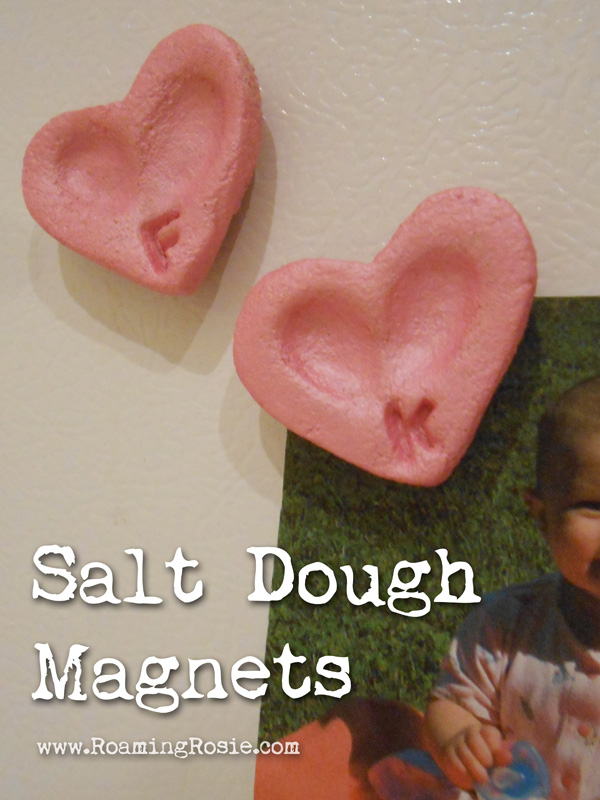 For Grandma’s birthday this year we made little magnets from salt dough that had the impressions of the girls’ fingerprints.

Last year we made a large heart for both of their footprints, and it was a big hit, but this year I wanted to something a little different.

And, admittedly, the little fingerprints don’t really show their fingerprint texture; they’re really more like finger “indents.”  But the girls really liked making them for Grandma and hanging them on the fridge.

We put their initial on their heart so they’d know which was which, and they like that their fingers fit in the imprints.

Salt dough is a pretty standard recipe.  For this project I made half of the recipe, and what we didn’t use, I let the girls play with, since it’s like play dough.

To make the salt dough:

To make the hearts, I rolled out the dough and used a cookie cutter to cut out the hearts.  The girls pressed in their fingers and I drew in their initials with a toothpick.  Then we baked them at 200 degrees Fahrenheit for two hours, flipped them over and baked for an additional 30 minutes.  Once cool, we painted them.  Once the paint was dry, I attached button magnets to the back.

And, of course, we rolled out the dough on our Jake and the Neverland Pirates Placemat.  I think I love this thing more than my kids.  It’s soooooo easy to clean.  We use it for meals and crafts.  I’m a fan of multi-purposeing.

Oh – and we used the toy play dough rolling pin.  But you could roll it out with whatever you have:  a regular rolling pin, a drinking glass, etc.

I helped my girls press their fingers into the dough so that their two fingerprints would mimic the shape of the heart.

Then I took a toothpick and drew in their initials by pressing the end of the toothpick into the dough.

After baking the shapes (we made a few) and cooling them completely, we painted them.

We didn’t seal them with anything, but you could.

I bought button magnets with adhesive so all we had to do was peel off the paper and stick them to the back of the hearts once the paint was dry.  But you could use any type of crafting magnet.

We had a lot of fun making these and the finished product made a great gift for Grandma’s birthday.

What have you used salt dough to make?