We recently did some Power Words Hopscotch to help my daughter practice her vocabulary.

I drew a hopscotch board on the driveway in chalk and filled it with some of her Power Words (also known as Sight Words).  Most of the words were ones she kept missing, but I also threw in some she knew well as encouragement.

One of the reasons we did a game like this – with her calling out each word as she jumped to it – was because she’s supposed to know these words on sight instead of having to sound them out each time.

And my daughter is always in a hurry, always rushing through her reading, so she often doesn’t take the time to sound things out anyway.  She just guesses.  One of the most important things in the world to me is that reading is fun for my kids, so instead of sitting her down and having her get frustrated and upset at herself, I’ve been trying to incorporate more learning activities that include movement and laughter.

Because for as much as I read to her every day, and as much as she would ask me to read to her, she wasn’t in a hurry to learn herself.  To keep up with her classmates, though, she needs to practice.  So we’ve been playing “games” instead of just sitting in a chair and going over flashcards again and again.  ‘Cause that’s even boring for mommy….

This one was a suggestion from her teacher and it worked out really well.  The chalk lasted for days (it didn’t rain) and every day for a week she would ask to go out and play hopscotch, including each time we were getting in and out of the car for school.

Plus, she called out the words for her younger sister, so they could both play.  Extra practice for the big sis, and a heartwarming moment thrown in for good measure.  :)

I also love this concept of hopscotch for learning because of the versatility.

You could use this for other vocabulary words, of course, but also for just letters for the younger crowd.  For example, if you’re working on some Alphabet Activities with your preschoolers, you could practice your alphabet by putting letters instead of the traditional numbers inside the squares.

How do you practice vocab with your kids?

I made this cute worksheet to include in my kid’s Valentine’s Day activities.

It’s great since my girls are learning their letters, but it’s still fun, even for older kids that are just beginning to read on their own.

It’s also a great worksheet to use if you’re following along with our Alphabet Activities.

It’s free for home and classroom use, but please don’t sell or reproduce it.

You can print the PDF by clicking the link below:

If you haven’t read the Introduction to the Alphabet Activities, you should start there.

Don’t forget to check out the Letter D:  Free Alphabet Worksheets for Kids, too!

For our letter sorting activity, I cut out two dolphin shapes.

After gluing down the dolphins, my daughter sorted the lowercase and capital Ds and glued one onto one dolphin and the others onto the second dolphin. 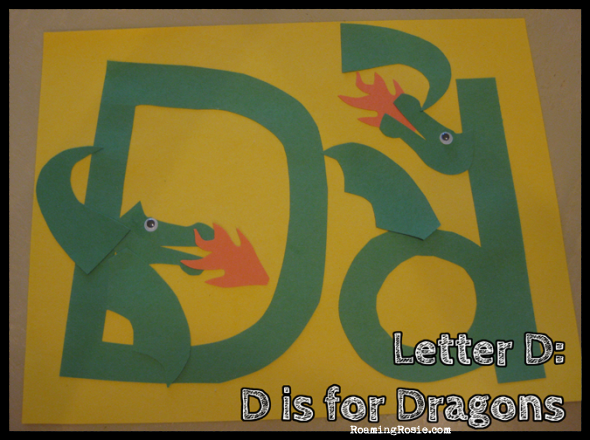 To make some letter Ds into Dragons, I had precut the big and little D, the dragon’s heads, a wing and tale for each, plus a breath of fire for each. 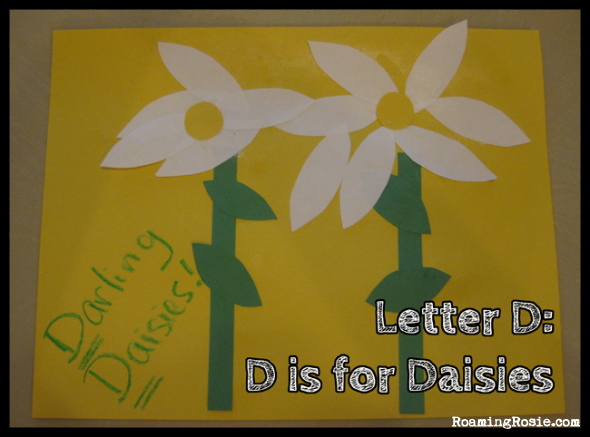 When we did this project, my daughter was still struggling with cutting straight lines, so I precut these shapes as well.

Now that she’s a little older, I’d let her at least cut out the stems, and try to do the leaves and petals as well. 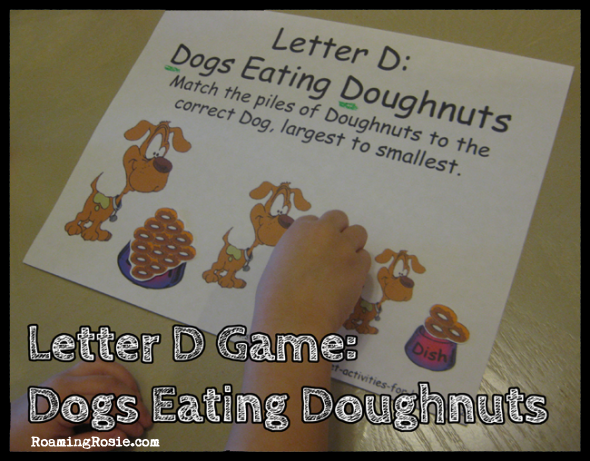 This is another file folder game I designed and, yes, we still play this one, too.

My daughter loves to tease me by pretending to put the wrong doughnut pile on the wrong dish and watching for my reaction.  :)

You can find this free printable on my Letter D: Free Alphabet Worksheets for Kids post.

Dot markers {or Dot a Dot Markers} are something we use now and again.

For this worksheet, I made letter Ds from bubble shapes that can be filled with dots from the markers.

You can find this free printable on my Letter D: Free Alphabet Worksheets for Kids post.

This was loads of fun.  My younger daughter, who was still crawling at the time, even got into it.

I made a capital and lowercase D on the floor with painters tape, adding small dashes inside the letter to replicate a road.

We drove the Hot Wheels through the letters like we were writing them.

You can also use the painters tape on tile or linoleum floors.  Sometimes it sticks to wooden decks or concrete, if you’d prefer to do this outdoors, though I’ve had trouble when dirt gets under the tape. 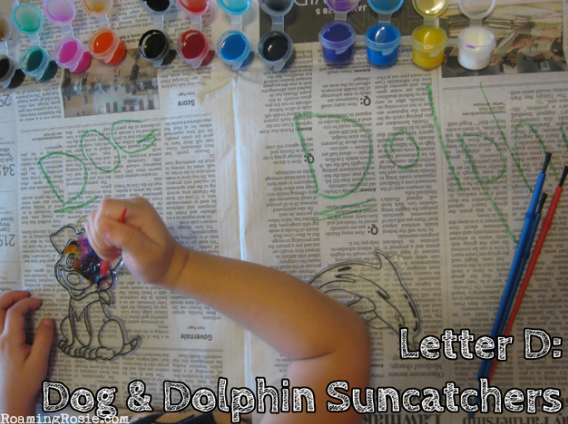 This was really just a fun craft that we did because my daughter loves painting so much, but we picked two animals that started with the letter D and I wrote their names on the paper to accentuate the letter.

These things are still hanging from her bathroom mirror with little suction cups.

We also made Dragon Drums.

For the drum, I used old formula cans with the labels peeled off, but just about any type of can will work.  The small one was green beans, I think.  I had picked the formula can because it was large, but using two different sizes also allowed us to compare the different sounds they made.

As you can see below, we filled the cans with rice, so that they also functioned as shaker drums.

The top of the can was covered with the top half of a green balloon which I’d cut in two and secured with a rubber band.

We had cut wings and heads from green construction paper and I folded the ends up to make it easy to slide the paper under the rubber band as well.

I let the girls beat on the drums with the ends of wooden spoons, and we shook them, too.

These dragon drums lasted a long time, even with the rough play of two young kids.  And we got a lot of enjoyment out of them. 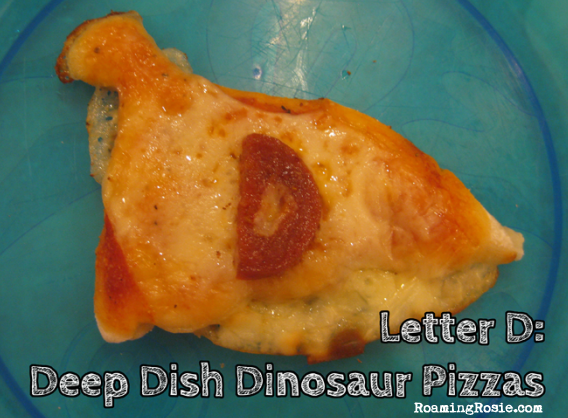 These are seriously fun pizzas to make.

I had intended for them to be “deep dish” when I made them, but they didn’t turn out that way.  I can’t remember why I still labeled them as such on the picture.

Anyway, as you can see in the step-by-step photo below, we started with my Easy Pizza Dough.

I rolled out the dough and used our Dinosaur Cutter to cut out dinosaur-shaped crusts.  I carefully transferred these to a parchment lined baking pan, trying to retain the shape of the dinosaur, but making sure to leave some room between them.

I also used the dinosaur cutter to cut out pieces of cheese from slices of mozzarella cheese {the kind meant for sandwiches}.

To assemble the pizzas, we added tomato sauce to them, then sprinkled them with Parmesan cheese.  I also like to add some salt, pepper, and garlic powder, but that’s optional.  We topped them with the cheese slices and with a letter D that I had cut out of pepperoni.

I made the meaty letters by cutting slices of pepperoni in half and carefully using a small paring knife to carve out the center.

The cheese spread a bit when they cooked, but we didn’t mind that at all.  :)

These Dulce de Leche Doughnuts were surprising good and relatively simple {although time-consuming} to make.

I’ve posted the step-by-step photo below, so you can see the process.  And actually, when I say it’s time consuming, it’s only because of cutting out the letter Ds and dipping each finished D into the caramel.  Not hard, but it does take a few minutes.  My daughter enjoyed the process, though, so – at least to me – it was worth it.

The doughnuts themselves are pretty easy to make since they’re baked, and the caramel has only one ingredient.  We topped them with nonpareil sprinkles for decoration, and though the caramel was a tad sticky, these were thoroughly enjoyed.

Normally I would add the entire recipe right here but this post is already pretty long, so I’m just going to post the printable recipe instead.  To print out the PDF copy of the recipe, click here:  Dulce de Leche Doughnuts

And here are some of the supplies I’ve mentioned in this post, including dot markers, painters tape, dinosaur cutter, and cookie cutters {for the letter D}.

I’d love for you to share if you’ve done any of these projects with your little ones!

And don’t forget to check out the Easy Pizza Dough recipe I used for the Dinosaur Pizzas: