Sometimes it’s the simplest things that are the best.

Simple ideas, for example. I wrote a Squidoo lens with suggestions for Jake and the Neverland Party Ideas, and I pinned a bunch of the photos from the lens, things like decorations and cakes and activities.

This photo was one I pinned. I’m really not sure where the image originally came from, so if it’s yours, let me know!

What I wanted to point out, though, was that this is a photo of a very simple concept: fill a bucket with sand and plastic coins and jewelry, hand kids some shovels, and let them dig for pirate treasure!

There’s no fancy branding or advertising on the photo, just a concept. But a fun-filled one that could entertain kids for hours.

And others were attracted to this simple concept as well, because my pin was re-pinned over a thousand times in just over 3 months. A thousand times.

See the stats for yourself.

{{{This was originally posted at roamingrosie.blog.com, but I’ve since transferred my blog here}}} 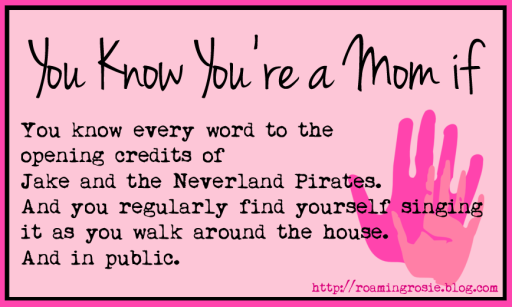 Yeah … I used to know the words to grown-up songs.

Now my life is consumed with kid songs.

Sometimes that’s okay, like when my 3-year-old spontaneously bursts into the ABC Song, while her younger sister dances along.  I love that they love that song.

But one day, after repeated requests from my daughter to sing the words to the Dinosaur Train or Doc McStuffins songs, I found that those were the only songs I could remember the words to.

Granted, since then I’ve incorporated more songs into our repertoire, but I still find myself randomly chanting, “Yo ho – let’s go!”

It’s a common hazard of motherhood.  :)

{{{This was originally posted at roamingrosie.blog.com, but I’ve since transferred my blog here}}}