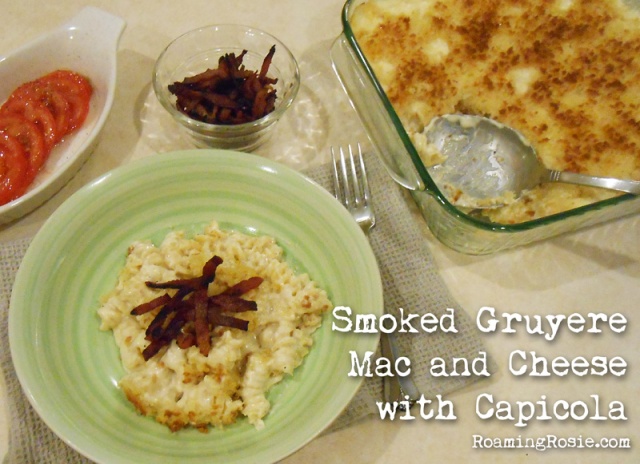 In case you didn’t notice with recipes like Sausage and Gouda Mac and Cheese, I’m a huge mac and cheese fan.

And I like to experiment a little.  Change things up.

Sure, I keep some box mac and cheese mixes on hand for days when I’m feeling super lazy, but macaroni and cheese is not a complicated dish.  One of the things I love about it is the casserole nature of the baked mac and cheese that allows me to wash up all the dishes and such while it’s baking.  Which means easy cleanup after dinner.

For me, easy cleanup = easy dinner. 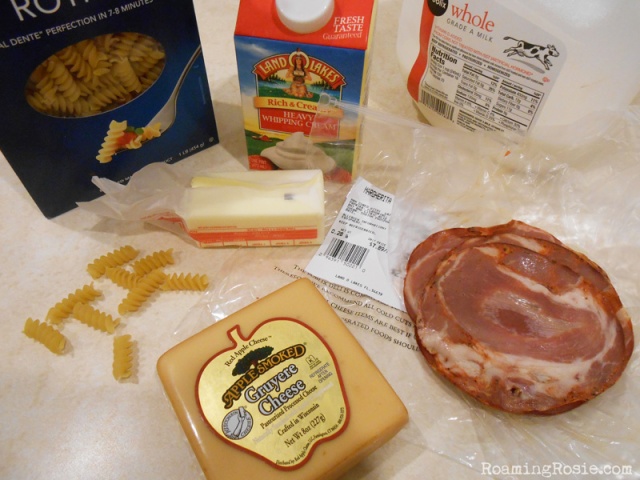 Anyway, here are the ingredients for this dish.

I chose Gruyere, which is something I used to eat more of when I lived in Germany, so I like to use it occasionally.

The Capicola is a spicy ham that we put in our cold cut pies around Easter.  Apparently this is an Italian thing.  Either way, I like the ham.

But it CAN be spicy.  And the spice is intensified a little when you fry it, which is why you can see that I only added a small amount to the top of my dish right before serving.  You don’t need a lot.

I don’t always use heavy cream when making mac and cheese, but usually just because I don’t have it on hand.

It adds a nice thickness.

Whether you use it or just straight milk, though, your roux should reach a point of being thick enough that the cheese doesn’t fall straight to the bottom when you sprinkle it in.

To get to that point, bring your roux JUST to a boil, stirring frequently. 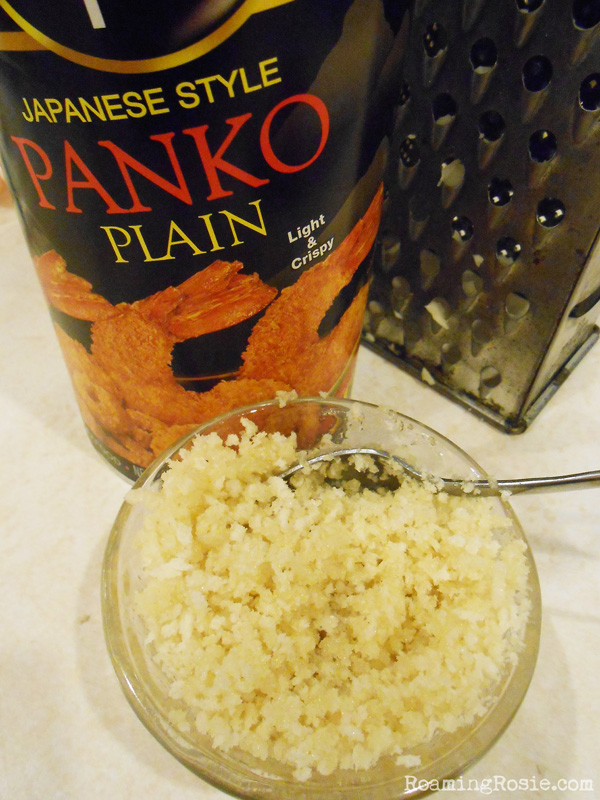 I switch between Panko and regular bread crumbs.  Whatever I’m in the mood for.

In this recipe, I used Panko. 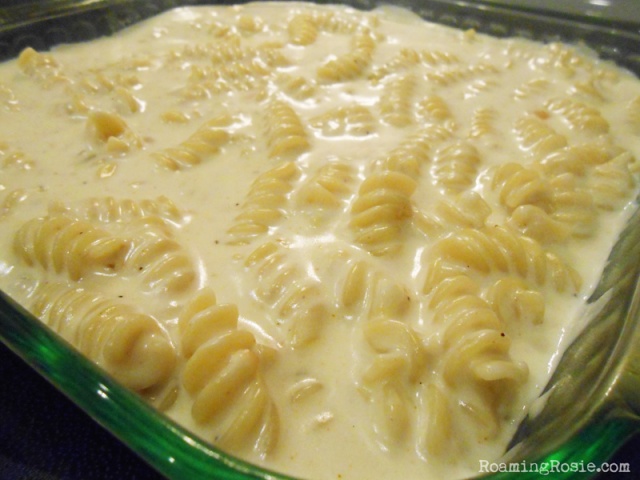 It’s the cooked noodles mixed into the cheese sauce before it’s baked.  You do want it to look a little soupy, because the sauce will thicken up in the oven. 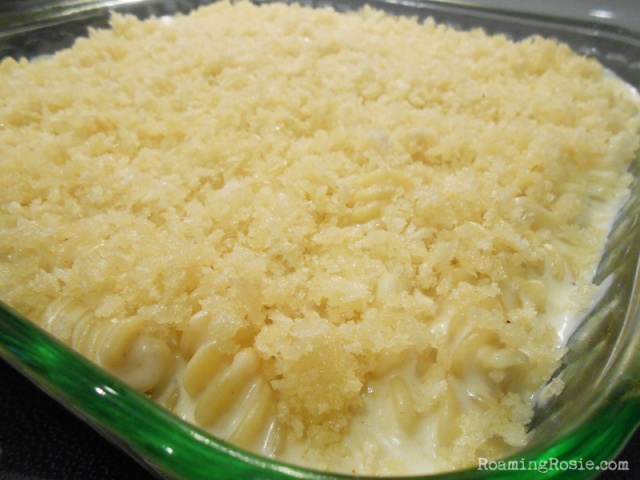 Here are the bread crumbs before baking. 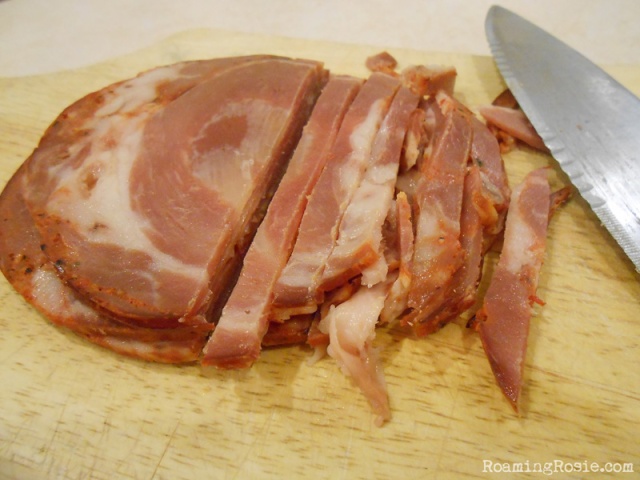 I used a 1/4 lb. of Capicola, slicing it rather thinly.

You could use more:  it shrinks significantly when you fry it (like bacon), but, like I said, you don’t really need a lot. 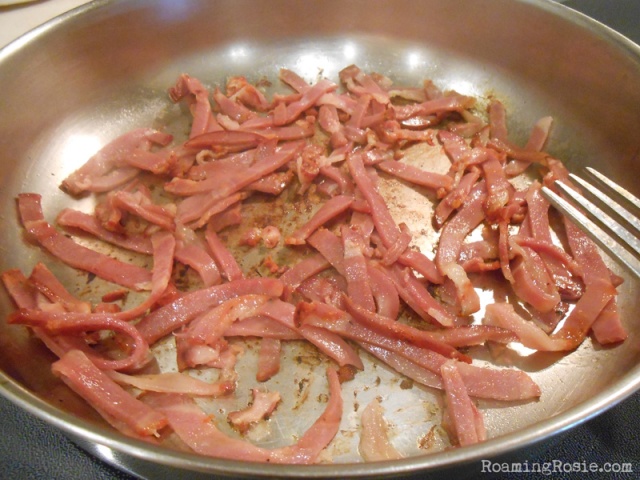 I threw the Capicola into the pan with just a touch of olive oil to help keep it from sticking.

Fry until nice and dark, but not quite burnt.

Then drain it on paper towels and serve separately. 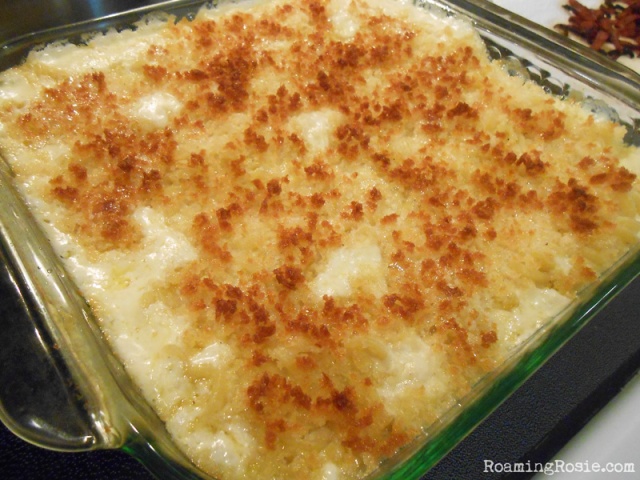 If your bread crumbs don’t brown enough during the last few minutes of baking, go ahead and broil it for two or three minutes – just keep a close eye since it can burn. 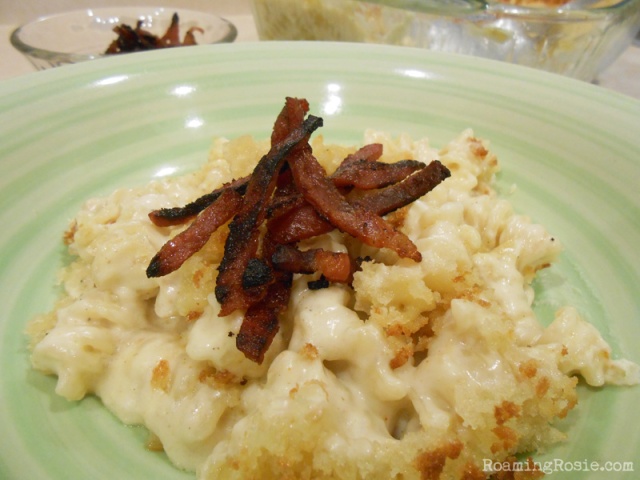 And there’s the finished product:  scooped into a bowl with a pinch of the crispy, spicy ham.

Serve with some salad and you got a meal. 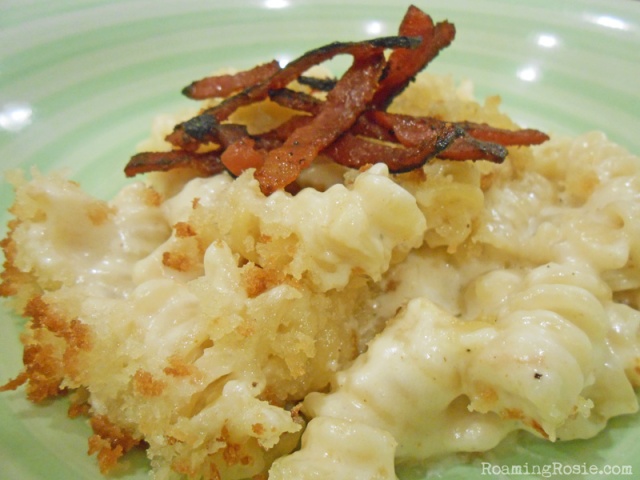 Cook the pasta until al dente, or one minute less than the recommended cooking time.

In a medium saucepan, melt the 2 Tbs. of butter. Stir in the flour to create a roux. Whisk in the milk and heavy cream. Cook over medium to medium high heat until just boiling, stirring frequently. Once it starts to boil, remove from heat and stir in the cheeses and spices. Continue to stir over low heat until the cheese has melted.

Mix the 3 Tbs. of butter with the breadcrumbs.

Stir the pasta into the cheese sauce. Pour into an 8 x 8 inch or a 9 x 13 inch pan. Sprinkle breadcrumbs over the top. Cover pan with foil.

Bake for 20 minutes. Uncover and bake for 5 to 10 minutes more, or until the cheese sauce is bubbling around the edges. If the breadcrumbs are not browned, broil for 2 or 3 minutes, watching closely.

Meanwhile, while the macaroni is baking, slice the Capicola thinly and fry over medium heat. Add a touch of olive oil if it seems to be sticking. Once the ham is crispy, drain on paper towels. Serve in a separate dish, to be used as a topping.

[Note: if you use a different shape of pasta, you may need to adjust the amount. Also, the ham is only meant as an accent. If you want a significant portion in your macaroni, use 1/2 to 1 lb.]