I’m a big fan of pretend play.  I mean, kids do it anyway on their own, and it’s just so much fun to watch them play with toys you helped create.  For example, I made a whole set of post office/letter carrier pretend play items.

And my girls love pretending to put on makeup.  I don’t wear a lot, but they always want to put on moisturizer, foundation, powder, or even Chap Stick.

But I don’t really like them to wear actual makeup.  They don’t need to be clogging up their pores at 1 and 3.  And I think it’s important for them to understand that they don’t need it, because they are beautiful without it, BUT they want to be like mommy.  So:  pretend play.

I used one of my old compacts from the Clinique City Base Foundation line, that they no longer make.  I’ve been using it for years, since I’m all about convenience.  They now make something called Even Better Makeup, which is similar, so you could use that, too.

Both girls like to play with it, and there’s no mess!  I’ll be making a second one when I’ve used up my current compact.

Here’s my daughter playing with it (while the post office set is also spread across the floor): 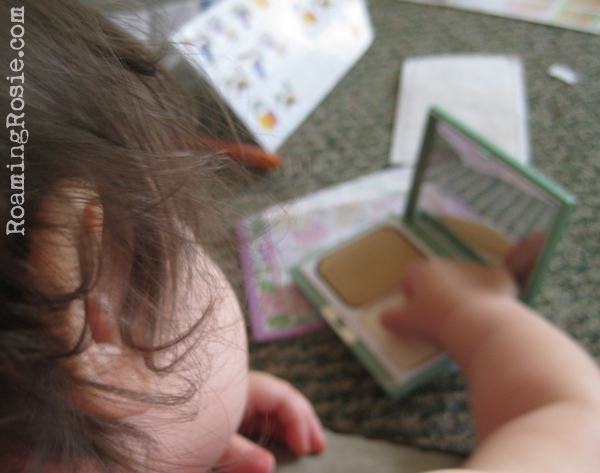