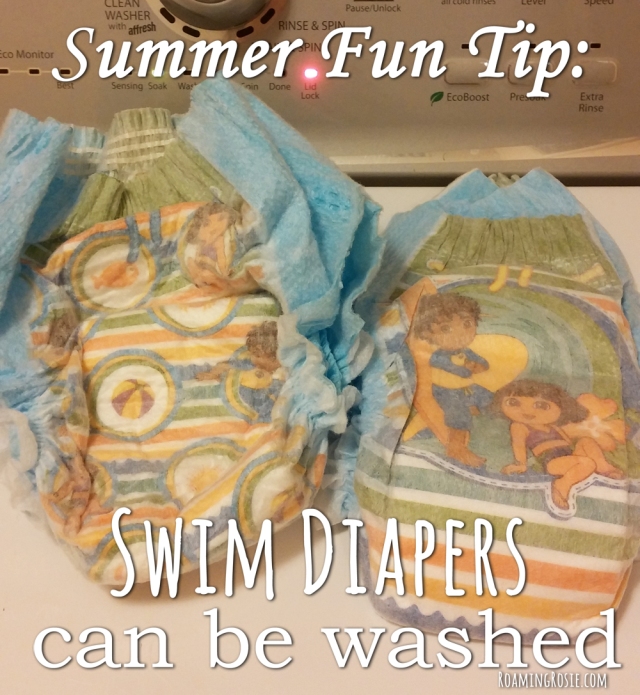 Did you know you can wash swimmy diapers??

Because I feel like this is something EVERY Frugal Mom oughta know.

I remember reading it somewhere – a Facebook post I think – and I was a little wary at first.

But now I’ve done it tons of times and I’m so grateful I figured this out.  Cause those things are expensive!!

Of course, my youngest is at the point where I don’t really need to worry about this much longer, but if your Little One is like my little girl, who finds the pool, eh, “relaxing,” you’ll need swim diapers “just in case” much longer than you were hoping to have to buy them….

In the photo above you can see an example:  the one on the left has been through the washing machine and the dryer and the one on the right is straight out of the bag and unworn.  Almost the same, huh?

Here are a few tips:

* If there’s poop in the swim diaper:  throw it away.  Right in the trash.  That one’s done for.

* If there appears to be some pee in the diaper, it can still be salvaged by rinsing it out with the garden hose or something similar before washing.

* If there is no pee OR poop in the diaper after your child wears it to swim, I would still wash it before letting them wear it again.  It’s like a pair of panties and you don’t wear your underwear twice without washing them, do you?  Especially not when there’s chlorine involved.

* To launder these babies:  wash and dry just like they’re clothes.  I would say like bathing suits, but I don’t put those in the dryer.  But swim diapers don’t shrink like bathing suits do, so go ahead and toss them in the dryer.  Wash them with your regular load of clothes and dry them with your regular load of dryer-safe clothes.  If they’re still damp after drying, you can hang them up for a while.

I’ve never tried washing these more than twice – but hey, that’s still 3 wears out of something I used to throw away after using once.  Which was bad for the environment and bad for my wallet.  Let me know how they hold up if you’ve washed them more than that! 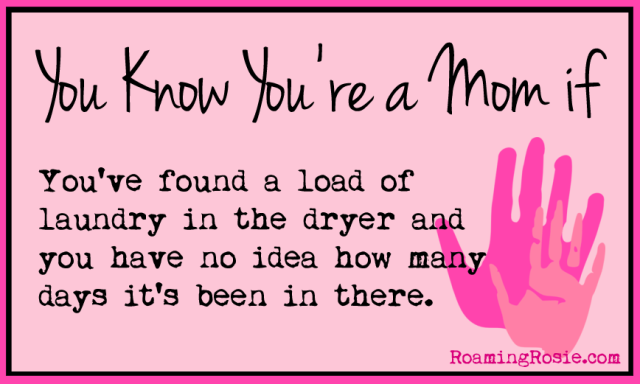 I know I’m not the only one who has experienced this.

Part of the reason I know this is, waaaaay back before I had kids, I used to live in an apartment with a shared laundry room.  I never ceased to be amazed at how often I’d go down to the basement and discover clothes in the washer or dryer that appeared as if they’d been there for days.  I never understood this.

Until I had kids.

Now this sort of thing happens more often than I’d like to admit.

True, as long as there are clean clothes to wear, laundry takes a back seat to, well, just about anything else… until I go to wash (and then dry) another load, and I have to casually turn the dryer back on to get rid of those multiple-day-old wrinkles.

No one will ever know…