I love me some Nightmare Before Christmas.

So Jack Skellington recipes are kind of a given.  This Halloween treat is made with a Rice Krispies base and decorated with candy melts.  The pattern in black and white is striking and it really pops on a platter.

It’s a fun project to make, with (or even without) kids.

To start, make a batch of Original Rice Krispies Treats (links to recipe from Kellogg’s site). I often throw in a splash of vanilla extract to the melted marshmallow mixture for a nice touch of extra flavor.

Once you have your pile of sticky cereal, spread it out on a large pan or cookie sheet that’s been prepped with non-stick spray.  Flatten it with your fingers (spraying them with non-stick as well) until it’s as smooth as you can get it.

Then cut out circles with round cookie cutters like these or these, or whatever else you have lying around.

Dip the circles in a shallow bowl of melted white candy melts, and shake them a bit to make sure the candy isn’t too thick before you set it back down to set.  I recommend doing all this on top of waxed or parchment paper.

Instead of the white candy melts, you could also use an icing like this one that I made for my Chocolate Almond Mummy Cookies.

Next, melt some black (or dark chocolate) candy melts in a piping bag (or a baggie with the corner snipped) and draw on those smiling faces.

It’s great because the faces are easy to make.  A couple of large eyes, small nose dots, and a string with lines for teeth and voila!

This was the display I brought into work.  I loved the way the Jack Skellington faces stood out.  Actually all of the treats pop – even in the recycled take out containers!

The spiderwebs on the right are tiny Peppermint Patties.  You can see the larger version of them that I did on this post.  Another super simple recipe that makes a big visual impact – my fave.

And for the pumpkins in the middle, I tried out something new for my kids.  Specifically the youngest who is obsessed with Nutella.

I took some silicone pumpkin molds (not really sure which store I picked them up at) and coated the inside of the mold with some melted orange candy melts.  Once that set, I put a tiny scoop of Nutella into the center of the mold, then drizzed more of the orange candy melts over to cover the Nutella.

The pumpkins took a little more time and effort to get right, but were definitely worth a try.  Plus, they’re filling so a few go far in a party setting. 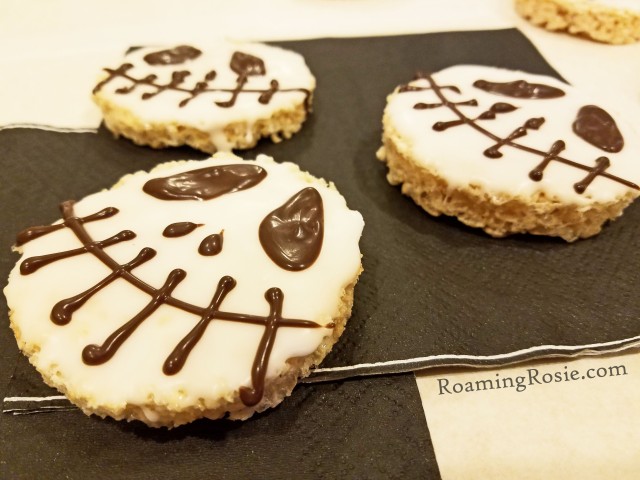 I love it though.

Of course, this is also why I make so many savory Halloween dishes – to balance out the sugar!

I’m not sure what Halloween is going to look like this year, when it comes to trick-or-treating or parties, but I sure know one thing:  we’ll have some eerily festive food.  ;)