Letter A Day was our first Alphabet Activities day.

My OCD really wouldn’t have let it happen any other way.  :)

Anyway, if you haven’t read the Introduction to the Alphabet Activities, you should really start there.

And don’t forget to check out the Letter A:  Free Alphabet Worksheets for Kids, too! 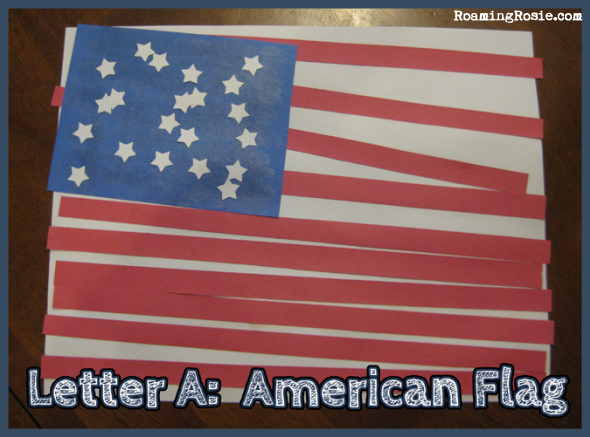 One of the first letter projects we ever did was an American flag.

And it really stuck with her.

To this day, my daughter points out the flags, excitedly shouting, “An American flag!”

The project itself was simple:  I cut out red stripes, a blue rectangle, and punched out some white stars ahead of time.  Then I showed my daughter a flag and she copied it in paper.

There are plenty of other flags you could do, too.  Just to name a few:  Austria, Australia, Argentina, and Afghanistan.  Also, Alabama, Arizona, Alaska, and Arkansas.

I always do a letter sorting project where I print out both capital and lowercase letters ahead of time.

These letters were cut into apple shapes.  {Don’t laugh at my apple trees!}

You could easily hand write the letters instead.  Honestly, my printer gives me more trouble with construction paper…

This was a fun snack.

I cut some thin slices in an apple and used an A cookie cutter to make little apple ‘A’s.

I’ve made these a bunch of times, usually for potlucks.

I’m not posting a recipe since it was all ready-made supplies {or you could substitute with your favorite homemade recipes}.

Check out the step-by-step photos:

I used a 2-inch flower shaped cookie cutter to cut pieces out of store bought pie crust.  I placed the flower crusts in greased muffin tins.  Then I scooped a few apples from a can of apple pie filling into the crust.  I topped it with a generous sprinkle of my Cinnamon and Sugar Mix, and baked them according to the pie crust directions.

These little pies are always a hit.

Chocolate is a favorite in our house, so these chocolate acorns, it should go without saying, were also a hit.

The great thing is that they also work well for autumn-themed projects.  I’m thinking of making them again around Thanksgiving.

As you can see in the photos, the ingredients are Hershey’s Kisses, mini Fudge Stripe cookies, and miniature chocolate chips.

I melted some chocolate chips in a baggy to act as the “glue” to hold it all together.  Then we stuck the flat end of the Kisses onto the bottom of the cookies and let them sit for a minute to set.  Then I put a drop of melted chocolate on the top of the cookies, and my daughter attached the kiss to the top.

Store covered… if you have any left.

Click here to get the free printable Letter A:  Free Alphabet Worksheets for Kids.

I’d love for you to share if you’ve done any of these projects with your little ones!

2 thoughts on “Letter A: Alphabet Activities for Kids”