Pizza is one of those things I love to make from scratch.

It’s really easy, and my kids can help.  I love getting them involved in dinner.

In this post I’ve included the printable recipe for the pizza dough, but I’m also going to go into detail about how we normally make our pizza.

And we normally top our pizzas with just cheese.  I’m a big fan of simple dishes with strong flavor, and I like to focus on the cheese.  So, I usually serve it with a salad.  But you can go ahead and top yours with veggies if you prefer.  Or meat.  We did sprinkle on some pepperoni pieces this time, too. 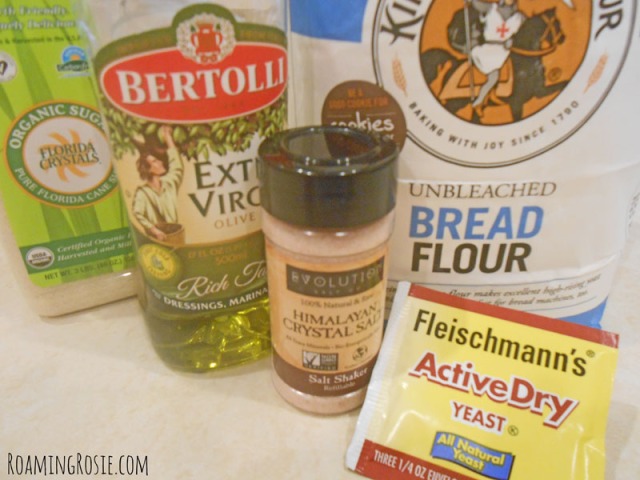 The ingredients are pretty basic, so I almost always have them on hand.

The only thing I sometimes run out of is cheese.  We eat a lot of cheese.  :)

Yeast, though, is one of those things that a lot of people I know have trouble with, so I’m going to explain what I’ve learned through trial and error.  And how I get my yeast to do what I’ve shown in the photos below:

You need the water (or milk – for some breads) to be between 100 and 110 degrees Fahrenheit.

This is the hardest part.

It’s hard mostly because it’s so important.  If the water is too cold, the yeast won’t activate.  If the water’s too hot, it will kill the yeast.  Either way, if the yeast doesn’t get all foamy and yeasty, you’ll have a denser, tougher finished product.  Still edible – but not ideal.

I’ve run into so much trouble in the past trying to reach the right temp in the microwave, so I switched to using the sink water.

I get the right temperature almost every single time by running the tap until the water just reaches a very-hot-to-the-touch feel.  I fill up my glass measuring cup and use a thermometer to make sure the temperature is where I need it, and it nearly always is.  Sometimes, if I let the water run hot for too long before filling the glass, it registers at 113 or 115.  So I let it sit for a minute.

Then I pour the water into my large mixing bowl.  And when I mix the yeast into the warm water, I also add some sugar.  The yeast eats the sugar, so it helps it.

After sitting for 10 minutes, the yeast should look very foamy, as it does in the above photo, and there should be a very noticeable yeast smell.

Then, making this dough is just a matter of stirring in the rest of the ingredients.

I usually roll out this dough with a rolling pin, but you can also stretch it by hand.

Those two little circles of dough in the photo above were my daughters’ pizzas.  I stretched them by hand.  Then I rolled out the large rectangle with a rolling pin.  (On a well floured surface.)

To transfer the dough from the counter to the pan, I rolled it around the rolling pin and unrolled it again over the pan.

I also cover the pan with foil and a brief spritz of nonstick spray.  You could use a light coating of oil, too.  Or parchment paper.  Sometimes I use a pizza pan with holes in the bottom because I do like the crispiness and I can skip the foil, but when I’m making multiple pizzas, I’ve found that the regular baking pans work well.

Of course, nothing is better than a preheated pizza stone, but I stopped using mine when I had kids.  I suppose I’ll switch back one day, but right now I’d prefer not to have to deal with a heavy, five-hundred-degree rock while I have two young children running around my kitchen. 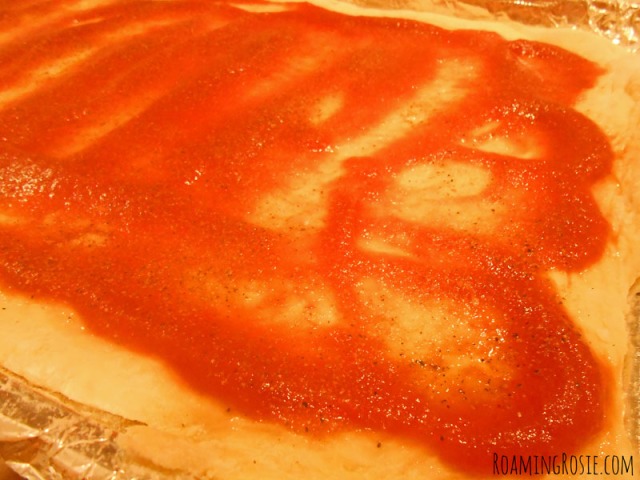 Anyway, on to the toppings!

I like to use just a few strong flavors for pizza, as I mentioned.  Thus, I top mine with plain tomato sauce, salt, pepper, garlic powder, Parmesan cheese, and mozzarella cheese. 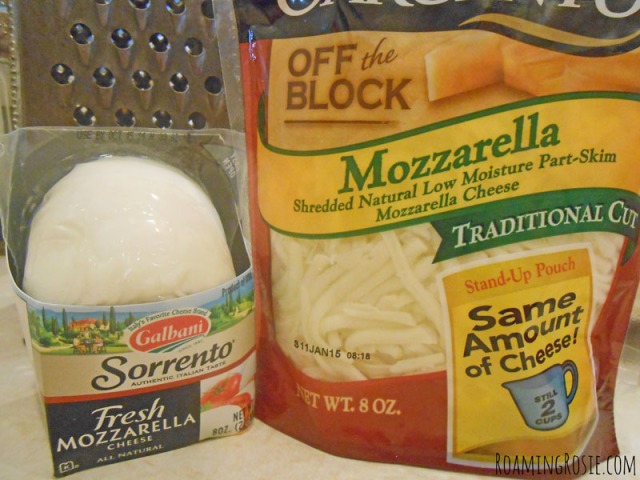 Why do I use half fresh and half part-skim mozzarella?

Once, on the Food Network, I saw the owner of a pizzeria explaining that he used that combination for a better texture on the finished pizza.  I tried it and I liked it.

I’ve used just fresh or just part-skim on pizzas, and I like that, too, but I like the combination best.

Oh – and why do I use plain tomato sauce instead of some fancy pizza sauce or spaghetti sauce that’s laden with herbs and other veggies?  Because all of the best pizzas that I ate in Rome simply melted in my mouth.  They were simple.  They used the best ingredients – and by best I also mean basic.  Just tomatoes in the tomato sauce.

Of course, you can feel free to use something different, but I suggest trying it with the plain tomato sauce and a little sprinkle of spices.

Here you can see the toppings.

My oldest daughter requested pepperoni on her pizza, but we only had a small chunk left.  So I cut the slices thinly and cut those slices in half to try to make it go a little further.

And since I put pepperoni on only half of the large pizza, my daughter copied me by only adding it to half of hers.  :)

Here are the pizzas all ready to go into the oven.

I layered the toppings like this:  spread on the tomato sauce; sprinkle on salt, pepper, and garlic powder; sprinkle on Parmesan cheese; sprinkle on mozzarella cheese; add any other toppings, such as pepperoni.

You can also brush the crust with melted butter or olive oil and sprinkle on some Parmesan or garlic powder.  I didn’t do that here, but sometimes I do.

You can see the differences in the crusts.  The above photo shows the small circle pizzas I shaped for my girls by hand stretching them.  Below is the crust that I rolled out with a rolling pin, and which is also a little thinner.  Both good, just with slightly different thicknesses.

And leftovers are easy to reheat.  Pop them in a convection or conventional oven at 350 degree Fahrenheit, and cook for about 10 minutes or until the cheese begins to melt.

Warm the water to between 100° and 110° F. I usually do this by running the sink water until it just becomes very hot to the touch and fill up a measuring glass to the 1 cup line. I then use a thermometer to make sure it’s the right temperature. If it’s too hot, it will kill the yeast, and if it’s too cold, the yeast won’t activate.

Pour the water into a large bowl. Mix in the yeast and 1 tsp of the sugar. Allow to stand for 10 minutes until foamy.

Add in the rest of the ingredients and stir until a dough forms. Cover with a kitchen towel (I sometimes use plastic wrap under the towel to keep it from sticking), and let rest for 30 minutes, or until about double in size.

Roll out the dough on a well-floured surface to your desired shape and thickness. The recipe will make one large pizza with a thick crust or two with a thin crust. Or multiple small ones.

Move dough to a baking pan and top with tomato sauce, cheese, and other desired toppings. You can also brush the crust with olive oil or melted butter.

And to print the free PDF copy of the recipe, click here:  Easy Pizza Dough