This dish has such a fun flavor, and it’s a nice change to the everyday (albeit wonderful) regular ol’ marinara sauce.

This recipe is based on Penne with Vodka Sauce by Giada De Laurentiis.  I’ve been making it for years, and, in the beginning, I was pretty much following her recipe word for word.

Then, one day, I went to make it and discovered that the only vodka we had in the house was orange flavored.

Well, I threw caution to the wind and, for one of the first times in my life, I changed up a well-tested recipe.

I was not disappointed.

This stuff is awesome.  First of all, the vodka – any flavored vodka – adds a nice sweetness to the finished product.  Regular vodka may not have much of a flavor on it’s own, but when you simmer it with tomatoes, it makes a very rich sauce.  By using the orange flavored vodka instead, you also give the dish a noticeable citrus touch.

And it makes your kitchen smell amazing as it cooks. 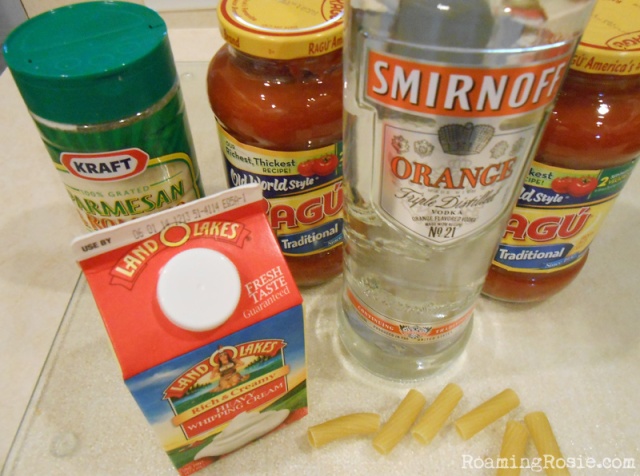 I’ve been making this version for quite a while now, and I just can’t go back to the regular recipe.  I love the fruitiness.  It’s one of the more unique flavors in my repertoire.

And it’s easy to make.

All of the ingredients are pictured above, so the only thing I don’t usually already have in my pantry is the heavy cream.  When I pick some up, I make this dish.

I use the Traditional Ragu bottled sauce because it’s a very basic sauce:  just tomatoes, mostly.  No overpowering herbs, no big chunks of veggies – I don’t want things like that to overshadow the awesomeness of the flavor behind the meal.

It’s also quick.  The whole thing from start to finish only takes about a half hour.  Just make sure you simmer it for a full 20 minutes, to cook off the alcohol.

And the noodles can cook while the sauce simmers.

I usually throw them in some boiling water when the sauce is about halfway done.

And you don’t have to use Rigatoni.  I’ve used Penne as well, but I prefer the bigger noodles for this.

Also, once you mix the sauce and the noodles, it may appear at first as though there is too much sauce.  Keep mixing and the sauce will absorb into the macaroni.

When I dish it up, I sometimes add a scoop of Ricotta to the top.  Some people like to mix it in, but I leave it like that, picking up a little cheese and a couple noodles in each bite.  I like the contrasting textures.  But the Ricotta is not necessary.  Just a nice touch.

Cook the pasta, according to directions.

In a large saucepot, combine the marinara sauce, vodka, and spices. Bring the marinara sauce and vodka to a boil, then reduce heat and simmer on low for 20 minutes. Stir occasionally. The sauce should reduce by about 1/4.

Stir in the cream and gently simmer for a few minutes until heated through.

Stir in the Parmesan. Continue to heat until the cheese is melted and fully combined.

Stir the cooked and drained pasta into the sauce. Mix well.

Serve with a scoop of Ricotta, if desired.