So, I was helping my aunt get organized for a yard sale, and she had some extra boxes from her recent move.  She asked if I needed them for anything.  I took one look at the big box and thought:  gee, that would make an awesome gingerbread house!

And maybe that wouldn’t be everyone’s first thought, but, hey, I mean the thing was already the right color…

So, I took it home, and I sculpted the box into a gingerbread house with some packing tape and a box cutter. 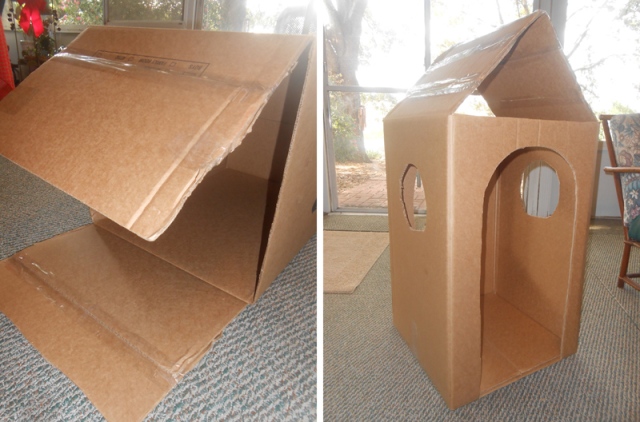 I made the roof by cutting off two of the top flaps and taping those to the remaining two flaps that were still attached, as you can see in the photo above.  Taped them together to form the ridge of the roof.

I then cut out a door and three windows (1 big arch in the back to match the door and 2 small circles on the sides) with the box cutter.

I taped down the flaps on the bottom, too, to secure the floor, being careful not to remove too much for the windows and such, to not compromise the structure.  I mean, I only expect it to last the season, but it still has to hold up to the excitement of a 1-1/2 and 3-1/2 year old. 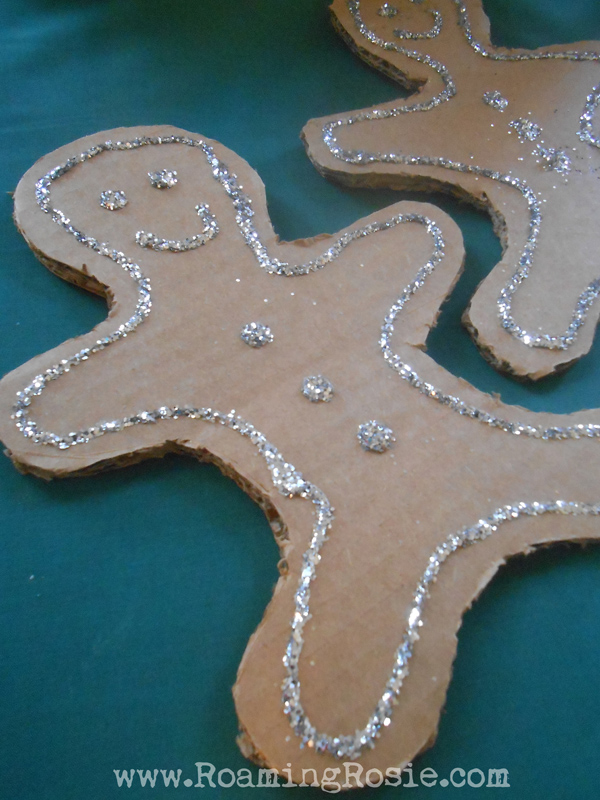 I took the scraps from the door and carved two gingerbread men for their house.  I decorated them with glue and glitter.

Because there’s always room for glitter.

Here you can see my girls decorating the gingerbread house.

I made some candy canes, peppermint candies, and gumdrops out of construction paper ahead of time.  I made the peppermints by adding a red star to a white circle (close enough), and cut arch shapes from a few colors to represent the gum drops (or spice drops).

And I cut a few waves to represent snow (icing) stuck to the end of the shingles, to give the roof some character.

My girls and I then glued everything on together, and they decorated the house with markers as well.

They decorated it, played in it, dragged it around the house, then decorated it some more.

It was a big hit.

Above you can see the two of them inside the house, decorating it with markers.

To make it yourself, you’ll need:

And before I go, one more photo, showing the little candy cane heart on the back of the house  :)

And don’t forget to check out these other Christmas crafts: